First Feeding Supplies for Infants and Beyond

If you decided to try making your own baby food by mushing up everyday fruits and veggies, you will want to invest in a few supplies. My recommendation? IKEA’s food storage (aka Tupperware – great job branding decades ago, Tupperware) set. I’ve no idea what the exact set looks like these days. That’s because I bought my set more than five years ago. Then I went straight back and bought two more identical sets. 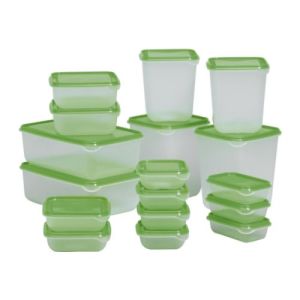 IKEA food storage (Tupperware, I really want to say Tupperware) sets have teeny tiny containers, too, in two different shapes: square and rectangular. Not only is the smaller size good for feeding baby one ice cube of food at a time, but they work great for putting an ice cube in and letting it warm up gradually when you are on the go. The larger containers, both the flatter and taller varieties, I used for storing cubes of food in the freezer once we got beyond the make a meal at a time approach. I even used the largest flat ones to hold my pumped milk upright after it froze solid, which allowed me to see the dates very easily while standing in front of a very cold freezer in very little clothing at very odd times of the day.

These containers haven’t changed in more than seven years, including the extremely affordable price.

I can’t remember the exact cost of the entire set, but it was somewhere in the $7 range and totally worth every penny and then some. [Editor’s note: I was wrong. They retail for $6.] We still use all the pieces every day for kid bowls and kid-sized leftover storage as well as larger portions and mixing containers. 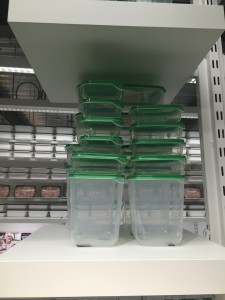 A set of Pruta containers stacked in store

In addition, I’d recommend a quality hand immersion blender. Some stuff we concocted in batches large enough to use the regular blender, but if I wanted to make more than one thing a time to freeze in cubes, which was generally the case, I had to hand wash the blender between batches. Sticking my hand in between sharp blades is never my idea of fun. I much prefer the quicker, less risky hosing down of an immersion blender. Plus, I could often mix the food in the container, then once it froze into cubes, dump the cubes back into the same container.

My final recommendation for feeding? Sassy baby spoons. The handle reaches far enough that you stay out of range of most missed targets, and they last. You’d think the metal kind covered in soft stuff at the business end would hold up best, but actually the plastic coating wears off after a couple serious chewing sessions. I’ve used quite a few that sported permanent teeth marks, too. It probably doesn’t affect their productivity (betcha never thought about productivity in relation to baby spoons, huh?), but I don’t want to know what kind of muck lurks in there.

Plus, the slight downward angle of the Sassy spoons combined with the upturn at the end worked just right for me for feeding with either hand. (It’s a skill, I’m telling you. Not a marketable one, but still.) The plastic material works well for collecting the excess food from around the mouth (and chin and nose and forehead) and for scraping the last bits out of the bowl while desperately stalling for time before the next batch is in your hand.

I bought at least three packs of spoons, which came four to a set. (Now they come in six packs.)  I’ve lost a few on the way due to forgetfulness, but not a single one has broken, and except for the yellow spoon color which can stain with the good stuff like carrots (Who knew carrots caused such permanent discoloration of everything?!? Maybe that’s why my skin has weird orange spots.), they all look as good as the day I took them out of the package and they all fell on the floor. I can no longer find the ones I own anywhere online, but here’s the closest thing I could find by the same brand, which I trust. (Note: Sassy also makes a baby spoon for when kids start feeding themselves, but that is not ideal for feeding a baby yourself.)

As a bonus recommendation, I can’t imagine living with a toddler and not having a dog to handle clean up on the floor (and the chair, and little hands, and anything else the dog or child can reach). If you decide to adopt a family pet, I recommend one that eats almost any food. My mother has a dog that eats only cheese and chicken and when we visit, I end picking so much stuff off the floor. I’m grateful to see our pup, who eats everything but apples and onions, when we get home. And I do a lot less clean up as a result of owning a dog.

If you can’t picture owning a dog, definitely try a Dustbuster for easier clean up.