My Favorite Brand For Cloth Diapering

I swear by Thirsties cloth diaper covers. I heard about them during the first few months of cloth diaper covers, and wanted to try them bad enough to drive three hours with my newborn to a store I had heard sold a selection. (I did call first to verify.) I bought one or two there to try out, and immediately started stalking parent list serves and secondhand shops for more.

I’m so glad I did. I scored two separate stashes at different points during my cloth diapering adventures, and every single one of my Thirsties cloth diaper covers remained in circulation until my third child outgrew them. That’s at least three kids worth of cloth diapering for each cover, because the ones I got with my second child had all been used by someone else first. 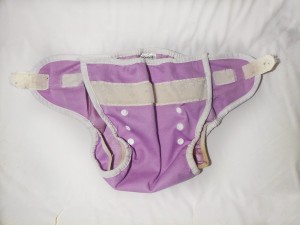 I struggled with fit with my first child, especially around the legs. Pee seemed to leak through everything I tried. It turns out I should’ve used better inserts from the get go, but I thought fit was my main problem, so I tried all the covers I could find locally and through Amazon. None of them compared to my Thirsties, which have a double gusset around the leg opening that eliminated all my urine leaks.

I persevered with cloth diapers because I had used so many disposables. I knew how often those leaked poop, and I vastly preferred wet clothes to poopy ones. I also knew from experience how many diapers infants used on a daily basis, and couldn’t bring myself to pay that much money when I had no income myself, or to throw that much waste into landfills.

I’m so glad I stuck with it until I met the Thirsties brand. Their popularity has risen for a reason, and now even Amazon carries their products, so they are much easier to find. I personally prefer their Velcro closure (called hook and loop) to the snaps, but both work really well and stand up to many kids’ use. I use the diaper covers, but I’m confident enough in the brand that I’d pick their pocket or all-in-one diapers over any other brand, too.