As an Amazon Associate, Practically Apparent may earn from qualifying purchases.

The Light My Kids Can’t Sleep Without 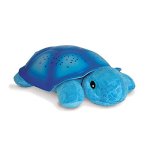 My kids, at ages 2, 4, and 6, fight over this turtle night light. Every night. We received it as a gift when our first child was an infant, but it didn’t really hit its peak use in our household until the toddler years. At that point, my eldest refused to sleep in the dark, and he could control the turtle light (unlike the other night lights we used).

The turtle’s hard shell lets through light from underneath, and the projection creates stars on any surfaces it hits, including the walls, ceilings, and underneath a sibling’s bed. The shell has four buttons, one to turn it off and three color choices for the light itself, in amber, blue and green. Soft material covers the turtle’s stuffed head and feet to prevent midnight owies when it inevitably falls on someone.

My three kids argue over who gets to hold it, control it, and choose the colors every single night. It’s gotten so bad I’m seriously considering buying two more to keep them all happy. Keep in mind Cloud b markets this item for infants. And my six year old can’t live without it. It is not the most packable item with the hard shell, although it doesn’t weigh much. (They offer a more compact travel version called Twinkles To Go that’s smaller and projects either stars or fish in blue or red.)The batteries also last much longer than I’d expect. I don’t know how many times we’ve changed them, but it isn’t so often that I can either remember the last time or be annoyed by the frequency.

The popular turtle model now comes in a variety of colors: blue, purple, and turtle colored, aka “classic mocha”. If turtles aren’t your thing, try the sheep, giraffe, unicorn, ladybug or hedgehog Twilight Buddies options, all of which project the same constellations.

Our Favorite Books for Toddlers

Good Clean Fun for Kids in a Box

Mix science and crafts with this lab in a box