As an Amazon Associate, Practically Apparent may earn from qualifying purchases.

Why I’m a Believer 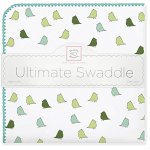 I thought my firstborn was an easy baby. Despite his nonstop demands, I knew what he needed: motion and swaddling. Constantly. After three kids, I realized easy definitely doesn’t describe him as an infant. He didn’t have the colic that so many people encounter, so I considered myself lucky. I knew how to make the screaming stop. I just couldn’t always do it myself.

Although I managed to outsource the constant motion part to other people and contraptions, swaddling I managed all by myself. After years of practice with other people’s kids and many different types of blankets, I could swaddle an infant almost as fast as I could change a diaper.

. I prefer them 40 inches square or bigger. The size sold for newborns, called receiving blankets, don’t wrap around far enough to swaddle properly, so I gave up on those quickly. I found a single layer of flannel became my favorites.

Tons of brands offer swaddle blankets now that swaddling has become fashionable again. I don’t like the majority of them because they require extensive instructions to use properly. I have an engineering degree, and I don’t like having to have a user’s manual handy to learn how to swaddle. SwaddleDesigns feature simple instructions sewn to the blanket for ease of use by anyone.

Aden and Anais make super light muslin swaddle blankets in a great size, but they ripped after only a few tight swaddles. If you prefer that brand, try their flannel material for better durability.

Once my kids started sneaking hands and arms out, I employed some Velcro wrap. I fastened it across the elbows, and they stayed snug and safe for naps and overnight. These sleep sacks come with built-in swaddle wings that can be closed over or under the arms to give babies an added sense of security without constraining their legs.

We quit swaddling by about five or six months, and sometimes I still miss the cute baby burritos.

See the year’s most popular posts all in one place

Get a new perspective on how parenting happens across the globe