How a Bouncy Seat Saved My Sanity

I couldn’t have lived without Fisher Price Baby’s Bouncer

. We had one on our baby registry, and I had no idea how important it would become in our lives. A kind friend gifted it to us before my delivery date, and it lived in its box until the day we came home from the hospital.

We took that bouncy seat out of the box the moment we got home. That’s because we’d spent almost 48 hours with my eldest at that point, and we desperately needed to delegate the bouncing duties. He had to be swaddled and bounced constantly or he screamed – loud enough that nurses in the maternity ward, who ought to be used to the volume infants produce, commented on it regularly. In fact, even our regular nurse at the pediatrician’s office noticed how loud he could be. (That’s because she gave him his shots, and he never forgot. Every time he laid eyes on her, he screamed. And he only had one volume level – too loud.)

Bouncing was the only way to quiet his screams. The Fisher Price Baby’s Bouncer doesn’t bounce on its own, but his screaming did cause it to bounce some. And if you got the angle just right, it worked perfectly to bounce it with your foot while sitting on actual furniture like the sofa or rocking chair. Once he fell asleep, on a good day, you could stop bouncing. If he started wiggling though, it was best to start bouncing before he woke up and screamed.

He either slept or screamed. We preferred sleeping, which was rarely achieved outside our bouncy seat.

I also used a yoga ball to bounce him, as well as the obvious walking and jouncing tried-and-true method. But the bouncy seat was the best for everyone involved.

It comes in a variety of patterns. I loved my Woodland Friends fabric so much I still can’t bear to part with it. The seat also offers what the box calls soothing vibrations, which means you put batteries in and it vibrates – much like a massage chair for tiny infants. Our child didn’t care about that as much, though we went through plenty of batteries trying to convince him and give ourselves a break.

Tucked in, swaddled, and sound asleep courtesy of our treasured bouncy seat.

We depended on it so much my husband wanted to put it inside the bassinet for nighttime, but I objected based on safety. You should never use a bouncy seat on anything but the floor (no raised surfaces because if kids fall out they can be seriously injured), and I knew I wouldn’t sleep a wink worrying about him falling out or becoming trapped between the seat and the sides of the bassinet. Instead I did the bouncing manually myself every night for months.

By age six weeks, we’d invested in a battery operated swing as well, but it didn’t soothe him as  reliably. It did give us an occasional break, though. 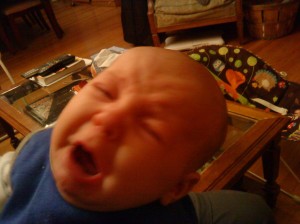 Here’s what he looked like when we weren’t bouncing him.

We used the toy bar much later in his infancy, for entertainment rather than necessity. Both my other kids loved the swinging toys, too, once they got their turn.

I swear by this particular bouncy seat because it gives a good bounce. We could use it swaddled and it wasn’t so steep he slid out even with vigorous bouncing. It worked for all three kids, though only our first needed it constantly, so it got less use with the other two. For them, it offered a convenient and safe place to put them so their older brother wouldn’t step on them, but that’s another story for another time.

Look at that! We finally got a smile – in his bouncy seat of course!