See How They Shine with Identical Photo Props

If you ask me for my best advice for a new parent anywhere, I’d say take photos – preferably with the same stuffed animal toy on the same piece of furniture each month and year. 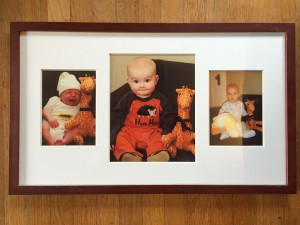 You can see the difference between my firstborn at birth, six months, and twelve months in this framed collection.

We took photos with the identical giraffe on the same sofa every month for the first year. For the second year, when growth slows down some, we did it every three months (15, 18, and 21 months old for anyone doing the math). Now, we do it every six months for each child, though I’m sure at some point we will go down to only birthdays. (And horror of all horrors, I can’t imagine them agreeing to this tradition as teenagers.) 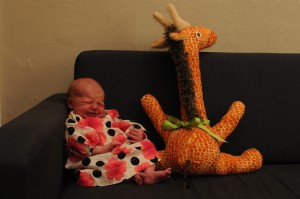 Posed with the exact same props, only the outfit changed each month. By using the same settings and the same angle for photos, it clearly displayed how much they had developed. We propped our kids up long before they could sit upright on their own, and also laid them out to get a photo as well. Now the kids pose themselves. It might be harder to see the growth objectively, but their distinct personalities come through loud and clear. 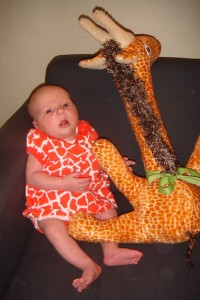 One month later, shown with the same stuffed giraffe

In our house, due to the stuffed animal chosen, we call these photo sessions giraffe photos. My mother handmade a stuffed giraffe for each of my children before birth, so we had an easy choice for the toy to include in photos. We took pictures with our newborn and the giraffe on a navy blue sofa in the kids’ room, where we sit to read books. While the sofa has moved several times, the photos still clearly show how much they’ve grown. 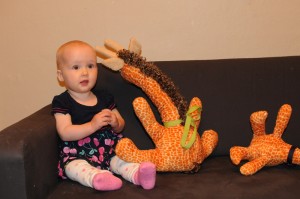 If you didn’t take photos with your newborn, you can still start. We tried to stick pretty close to the same day each month for the first year, but by the second year (and third kid) we try to get them done the same week (or month) of their birthdays and half birthdays. 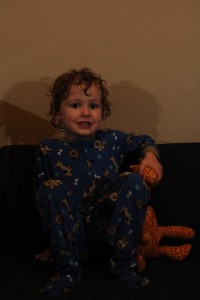 The furniture we used has sentimental value for us, since it’s the place we sit and cuddle to read books. And obviously the stuffed giraffe has tons of sentimental value. But the photos are priceless. Even if, like me, you never manage to print out and frame the photos for anyone but your first child, they provide hours of entertainment and plenty of “aw” moments when you go back and review them periodically. 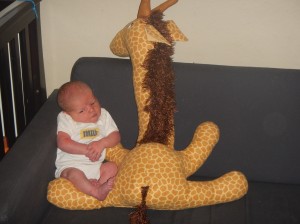 Just in case you’re worried on my third child’s behalf, here he is as a newborn with his even bigger stuffed giraffe.