Cover Your Bases Without Losing Your Plugs 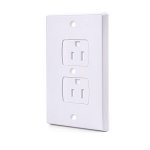 If your child has started rolling around, then think about child-proofing your home, including covering your electrical outlets to prevent electrocution. At our house, I worried more about other safety issues, like baby gates and securing furniture, because every single outlet we owned seemed to have something plugged into it. (We live in an old house where they didn’t predict the need to have electronics, much less charge them constantly.)

. Instead of a plug that you have to remove and keep track of when you plug something into the socket, the plate with built-in covers means you don’t end up hunting for the plug. It also means kids can’t remove a plug and then eat it or choke on it. Installation requires more time and effort than standard socket plugs, but less time than you’ll spend hunting socket plugs in the long run.

You remove the entire outside plate of your electrical outlet and replace it with the new plate, which includes a sliding outlet. When not plugged in, the outlet remains to one side, where there are no holes accessible. Even if you (or your child) accidentally unplug something, the outlet immediately slips back into place.

I loved the simplicity of the design. When plugging something into the outlet, you slide the prongs in from a slight angle to get the hidden cover to move aside. I can’t see any way to do it with anything something with plug-in prongs. I don’t think brand makes a difference for these covers. Whatever you can get the best deal on should work well.