I still remember the days of teething. My first two started between six and seven months, right on schedule. As a breastfeeding mom, that time frame worked for me, though I wouldn’t have been sad to wait longer.

By the time my third came along, I felt like I knew what to expect and when. Boy was I wrong. By four months he showed all the classic signs of teething: drooling, fussiness, and gnawing on anything he could manage to get to his mouth. I figured no way could he be teething and ignored the signs, much to my boobs’ chagrin. If you have or suspect teething, try these tricks before your boobs become a chew toy. 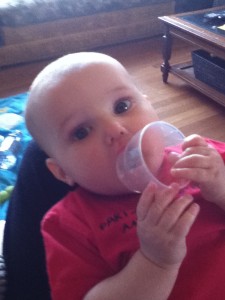 You can take a clear plastic bottle (or a glass, but that’s trickier when things get slippery) or bottle cover and have your baby put their mouth on the (clean) outside where the bottom meets the side. Then peek through the bottle at the gums. Any teeth coming in on the top or bottom will show up fairly clearly as white spots just under the gums. If it’s all pink, you’re still good. I learned this trick from Super Baby Food. 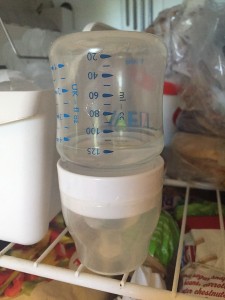 Once teething starts, you can take a bottle and partially fill it with water. You only need enough water to fill the nipple and lid. Then put a cap on it, turn it upside down, and stick it in the freezer. Older babies can easily hold the bottle, so they instinctively suck on the frozen ice contained inside. And the nipple keeps the ice from being too cold.

Once you need it, ice frozen into bottles provides an affordable and easy way to soothe sore gums. You can stick as many in as you can spare bottles. Some sippy cups work well, too, if the soft spout can be chewed, though beware. Kids who learn to chew a soft spout don’t stop and some spouts can disintegrate, with the separated pieces becoming a choking hazard.

I know some people used frozen breastmilk for the same purpose, but I never wanted to spare any of that. I worked too hard to collect and store it, and considered it too precious to use for non-feeding purposes.

I usually had two bottles in my freezer at most times. My older kids loved to chew on them, too, so by the time I used them with my youngest, I had to stick a third one in to have one for everyone.