Have you read the Amazing Machines book series by Tony Mitton and Ant Parker? We received a box set containing five of the titles as a gift because of my eldest son’s obsession with both trains and planes. We loved them so much we now own ten titles, and my kids actually cheered when they opened the last few titles we needed during the holidays.

If you want to dive in, or also have a vehicle obsessed child, the five box set contains Amazing Airplanes, Flashing Fire Engines, Roaring Rockets, Tremendous Tractors, and Terrific Trains. You can buy them individually as well as in the set. The other five titles in the series include Busy Boats, Cool Cars, Dazzling Diggers, Super Submarines, and Tough Trucks. They have since added both High Flying Helicopters and Marvelous Motorcycles to the collection.

The square paperback books weigh next to nothing and have bright colors and cartoon illustrations that fill the entire page. The rhyming text varies from two to four lines per page, but reads quickly.

Both my six and half, five, and two year old kids all  love these books. I will start reading to one of them and before the end of the book, all three have gathered around – despite the fact that they can almost recite some of them word for word. The intended audience ranges from 3 to 5 years old, but we’ve obviously been enjoying these well before and past that age range. They cost very little and take up next to no room on the bookshelf, which also makes them great for traveling. 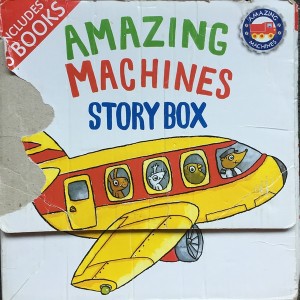 Our carrying case has seen better days, but it protects the five books very well.

Our original box looks a little worse for the wear, but still holds five (and sometimes six or even seven) of the books no problem. The plastic handle on the box has long since parted ways, though I’ve seen it floating about recently and just haven’t managed to reunite them. The books have all held up well, especially considering the price point. One of them has a small tear at the bottom from some forceful page turning by my two year old, but that’s the extent of damage to these well-loved books.

The series includes board books and activity books as well as two additional titles now.

The same authors have expanded into board books and activity books, which all my kids ask for every time they see the picture in the back of the book. I’ll keep you posted on how much we like those.

My youngest set up a bookstore with these titles – after we read all ten books.