I have stayed at home with my three kids seven years almost to the day. Now that my youngest has begun preschool and I have two days a week ALL BY MYSELF, I’ve compiled a list of the top five things I want to do with my me time.

1) Use the potty by myself

I have gone to the potty by myself in the last seven years, but it generally involves locking the door. That means the probability of someone on the other side kicking, pounding, and screaming goes up exponentially. I rarely bother even shutting the door anymore because it’s easier to have company than it is for me to poop with one or more people screaming, crying, or whining for my attention and pleading “when will you come out?” or “when will you open the door, Mama?”  It irks my husband to no end that I don’t close the door. I’m lucky if it’s just one kid in there with me, and half the time both dogs and the cat wander in and out as well. Still I don’t see the point of closing the door. I lock it only to save myself a forty minute explanation of reproduction on a five year old level because I want to remove a tampon or change a pad in privacy. Ha ha ha ha ha! I don’t know what that word means anymore, unless you count my kids racing for the bathroom to slam the door in the loser’s face and yell “Privacy!” 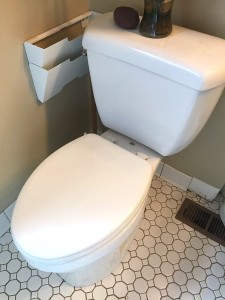 Me and the potty, alone again at last!

Despite the fact that between the kids, the animals, the house, and my husband, I rarely sit down for more than five minutes consecutively between the hours of 7 a.m. and 7 p.m., I don’t get exercise. My activity levels are sky high and I have no trouble hitting 10,000 steps a day (thanks tracker!), but I don’t actually elevate my heartbeat or break a sweat unless we go to the park without shade on a day over 90 degrees. I enjoy walking, preferably by myself. It does not count if I am walking someone to or from school, to the grocery store, the library, or the park. You know why? Because I don’t get to go at my own pace. Now that the oldest two ride bikes and my youngest still rides in the stroller, I spend half the block running to keep up with the bikes and the other half of the block standing still waiting on someone to finish picking up a rock, or leaf, or stick, or their nose. Or someone needs a snack (yes we finished a meal less than half an hour ago), or a drink, or they can not possibly wait another millisecond to share that thought that just occurred to them. Exercise to me means I get to walk without picking up poop (animal or otherwise) and stop only when I want to or the traffic signs demand it. My heart rate stays elevated and I might break a sweat from effort depending on the weather and how energetic I’m feeling. 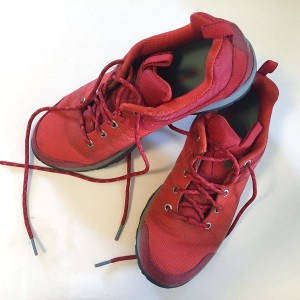 I’m looking forward to putting some solo miles in with these guys.

I admit my priorities might be out of order, but showering on my own is pure luxury. See also number one about the bathroom, but worse because I stay in there longer and my kids think it’s fun. I spent the first six months of my son’s life showering with him because the other side of the shower curtain was too far away for his fragile psyche. It hasn’t really changed, except the size of the kid and how much room they take up in the shower. Crazily enough, I don’t like to use sharp objects around my kids, and god forbid they get real soap or shampoo in their eyes. As a result, using shaving cream and a razor can make my day. This item falls further down in the list though, because I’ve gotten smarter. I’ve learned food and electronics trump shower fun with mom, and can sneak one in here and there. Plus, in a real pinch, I have the evening after bedtime option. Also, if I’m going to work up a sweat, I want a shower afterwards, not before. My next goal: a bath. We own a whirlpool tub that I’ve only used a handful of times in five years. That thing has my name stamped all over it in the middle of the day now that I’ve spent the first two weeks of school getting meetings and appointments and things that must be done now out of the way.

That whirlpool tub is calling me.

The height of insanity, I know. I want to eat an actual meal in my own home and know that whatever food I put on my plate will go into my mouth. Or not, but only because I decide. I cannot remember the last time I ate a meal at home before 7 p.m. where I got to choose the amount of food I wanted to eat based on my hunger levels (or need for comfort). Instead, I pad my plate with extra for the little hands and mouths that beg for bits, despite the fact that the exact same food exists on their plates. Even better, I can put whatever I want on my plate with zero guilt. Potato chips? Sign me up! Chocolate before my sandwich? No problem. I may not want those things, but that’s not the point. The point is, for the first time in seven years, I can have them if I want them. No excuses, no sharing, and no explanations needed. I can take as long as I want to eat. And I don’t have to make everything spicy just to keep my food to myself, though I freely admit that trick has saved my lunch countless times. Lucky for me I like spicy food and they do not.

Real dishes, real food – or not, it’s entirely up to me!

I’m not sure I know how to carry on a regular conversation. You know, one where no one interrupts for at least five minutes with urgent requests like “I need more milk.”  A conversation where the previous sentence links directly with the sentence before and after, and I don’t lose my train of thought at least twenty times over. I have reverted to text for communication – even with the people I’m talking to standing right next to me – because my kids can’t interrupt and I can read whatever we were talking about before each kid developed a pressing need that could not be ignored. Another bonus of texting? My kids don’t read what I’m sending, so I can talk about things that might not be appropriate for little ears with none of them the wiser. I haven’t managed as much adult conversation as I’d like before bedtime, but I’m super excited about the possibility.

Prior to these last couple of weeks, if I wanted to do any of the above, I had to find a sitter, pay them, and hope none of my three kids chased them off to do these things. I felt weird showering with strangers in my house, and I still couldn’t eat in front of my kids. (They have a sixth sense for the potty and food and come find me even when I squirrel myself away. I tried eating in the bathroom once but I think that made things worse, not better.)

So I’m still not sleeping in, which means I get woken up in the middle of a sleep cycle every single day for the foreseeable future. But, boy, do these five things make up for a lot of crap. It’s almost like I’m a real person again, instead of just a mom.