The Magic Behind Leak Proof Absorption

Ever wondered what makes a diaper work? No matter what type, reusable or disposable, diapers consist of two main components: the absorbent inner layer, and the moisture-proof outer layer.

Inside of a Huggies disposable diaper

If you’re already a parent using cloth diapers, you may have seen the clear globs of goo from the inside of the diaper. That’s the absorbent part. In most cases, it consists of up to two components. The first part is wood pulp. Betcha didn’t know you were wrapping your baby’s bum in wood, huh? Most companies dye the wood pulp white (adding bleach or another synthetic ingredient to the diaper mix). The second part is generally sodium polyacrylate, which is the most popular, but by no means only, sodium polymer. The sodium polyacrylate soaks up any moisture, keeping baby’s bum dry. Other places you might find sodium polyacrylate lurking are your laundry detergent and fake snow.

The same diaper shown folded up

The outer layer, the one that keeps all the good stuff from leaking out onto clothes or other surfaces, consists of a polyethylene film. Green versions typically substitute a version made from vegetable oil rather than petroleum. Don’t recognize polyethylene? Check your plastic wrap in the kitchen.

A third and final layer is used on the inner most part of a disposable diaper, the layer that comes into direct contact with your child’s skin. That layer is made from polypropylene. Think indoor/outdoor carpeting and you’ve got the idea. Polypropylene is pretty nifty stuff, since it can be molded as either plastic or a fiber. While used in clothes such as thermal underwear, polypropylene is also the main ingredient in plastic parts such as dishwasher-safe food containers. 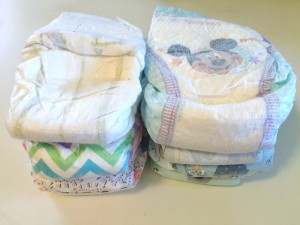 Ever wondered what went into these disposable diapers?

Beyond those three components, companies may add dyes to create designs and perfumes. So next time you run out of disposables and don’t want to take a baby to the store sans diaper, try wrapping some wood pulp and fake snow together in plastic wrap, with a little Astroturf on the inside for good measure.

Want a more in-depth look at the materials in disposable diapers? Check out this article from the Baby Gear Lab.