What I Did Today

It’s midafternoon. I’m tired and feel like I’ve gotten nothing done on my ever expanding to do list. So I thought I’d record what I’ve accomplished today to see if my perception matches up with reality. 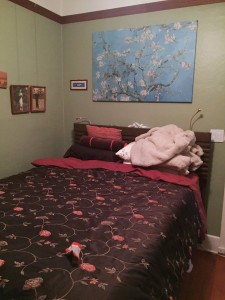 I threw the covers over the bed, which counts as made, right?

I got out of bed. (Major accomplishment since yesterday did not go as ideally as I’d have liked, and, as usual, I stayed up too late enjoying various kid-free activities because after seven years at home with the kids, I can.) I even made the bed and got myself dressed. I got one kid to use the potty three times so far today. Even though he can do it himself, he still prefers me to get him on, get him off, and take his pants and underwear on and off. It’s also a toss up if I get to wipe and flush, and washing his hands is always a negotiation – one I can’t always handle first thing in the morning.

I’ve spent my fair share of time in the bathroom, and lots of someone else’s share, too. I even remembered to pick up the rug after my shower so the dog doesn’t poop on it.

I got one child dressed and made three lunches (normally four, but the youngest kid didn’t have school today and spent the entire morning eating, so I guess maybe all that snack preparation counts as the fourth lunch?). I remembered to check my email before the kids departed for school in case any last minute reminders or changes went out. I went grocery shopping so I can continue to make lunches and dinners for the remainder of the week.

I showered. That doesn’t happen every day, much less without company, so another major accomplishment there. I also ate breakfast and lunch, which may not seem like achievements. Both of those can’t be guaranteed, though, depending on how the day goes and where we need to be when. I’m especially prone to forgoing or forgetting breakfast completely if we have an unusually busy morning in the “get to school on time” race.

I tidied the kitchen twice, once at breakfast time, and again after lunch.

I can see the counters and dirty sink, so I’m counting the kitchen tasks, too.

I paid and managed to mail two bills – on the same day no less. Since our mail carrier refuses to take mail from our mailbox, I walked the bills to the secure mailbox a few blocks away. While outside, I picked up more dog poop than I care to count and replenished the bird food in both the front and backyard. Because I got bored but my kid wasn’t ready to come inside yet, I also managed to swept the patio, which resulted in an immediate request for my preschooler to have the broom instead of me. I persevered until I could see more than half the patio as we originally intended it to look.

I retrieved the dog’s leash and collar. It turns out we left it with the pet sitter when we got home from our holiday trip. It took me several days to notice it missing, and another few days to figure out where it went. Then it took me almost a week to send the email to the sitter asking if they had it and another five or six days to actually go the one block to pick it up.

I picked up enough toys that I can almost walk through the house without tripping or stepping on something. I completed one wooden train track, located two missing train cars, and finished making a road.

So all in all, a very regular day, with not much going on, which I guess is why I feel like not much got done. Welcome to motherhood.