I just played musical car seats with our four child safety seats in our Mazda5 compact minivan. If you are pregnant and shopping for a new set of wheels, or even just buying a new car and think you might have car seats in it at some point in the future, seriously consider getting an automobile with reclining back seats. That one tiny detail can make the difference between installing a car seat in a cinch and fighting with the seat and the car and yourself to get a good installation.

I can install any car seat in the middle row solidly in about three minutes. In the back row, where the seats don’t recline and have only one position, it takes me more than half an hour to get a safe installation.

We still have two convertible car seats, but our oldest son rides in a convertible booster seat. He still uses the harness, but exceeded the LATCH weight limits almost a year ago. Because car manufacturers cut costs, they only installed LATCH in the two middle row bucket seats. The back row, which is tight for most adults, only has seat belts and thankfully tether hooks, (Car Seat dictionary here) but no LATCH connectors.

I finally got tired of sliding my tall three and half year old over the back row into his rear facing seat. Rear facing seats work great in this vehicle because he has a wonderful view out the back (instead of staring at the headrest in the middle row) and I can put him in and out via the tailgate, which shields me from the worst of the weather in winter and summer. But it seemed silly to have my three year old installed with the seat belt while my seven year old couldn’t use one of the two LATCH positions, so we moved everyone around.

The middle bucket seat can recline to fit the exact angle of the child car seat, making installation a breeze.

We now have two Britax Marathon seats in the second row and our Graco Nautilus booster in the back row. But because the back portion of the rear row only has two positions – upright and folded flat, getting a safe installation with the Graco in the back row nearly defeated me. I came out with a large bruise on my jaw (I moved the middle seat up, not realizing it would collide with my face while I was bent over on the inside to reach the lever), a cut on my knee, and a very sore back. But my kids are safe, which is all that matters. 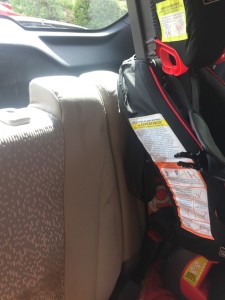 In the back row where the bench seat has only one position, the booster seat is much harder to install, even though it fit like a charm in the middle row.

If you have the option, even if it costs extra, get a backseat that has several – if not infinite – reclining positions. It makes installing any car safety seat a cinch in the middle row of our car, and in the backseat of our station wagon. In other rentals or relatives’ cars, that one details can make or break a car seat arrangement, even if you’re not trying to squish three car seats across the back. 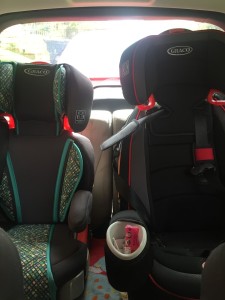 Even a smaller highback booster seat that uses the seat belt for restraint is tricky with the upright third row. I have to remove the headrest to make it work.

Trust me. You’re looking at at least eight years of kids in car seats. Even if it only saves you time and injury for one kid on a few installations, it is totally worth every penny. Even better, that feature makes the car more comfortable for older kids who don’t need car seats any longer as well as adults who might end up riding back there, and for carrying all sorts of random cargo you might started acquiring once you reproduce.