Don’t Lose Your Mind on This Marble Run

While I freely admit that my kids love this marble run they picked out at a toy store with grandparents, I do not. The kid rate it awesome. The parent review rates a big two thumbs down.

I’ll start with my kids. They love the elevator that carries marbles back to the top of the run. It uses a combination of gears and supports with parallel red hooks to scoop up marbles and drop them at the top. They also love the funnel, where marbles roll around and around until dropping into a hole at the bottom. A switch underneath the red funnel sends marbles down one of two paths to the bottom. A spiral track keeps them entertained as well. A second starting point (besides the elevator) has a lever kids push to send marbles down, which they adore. They also like the colored balls, which come in blue, white, red, and yellow.

As a parent, I like that you get all the fancy pieces in one purchase. You don’t have to buy additional accessories or extras to get a cool set up. But my liking ends there.

The red funnel sends marbles to a switch underneath, which alternates the direction they go down the run.

We ditched the box to make the whole set up fit inside a suitcase traveling home. It came with one sheet of instructions, based purely on pictures. And the pictures include every set made by the same company. While some people may know the name or number of what they bought, I wasn’t even present at the time of purchasing. (After some internet assistance, it turns out we own 6575, which is no longer available for a very good reason.) I don’t know that I ever even saw the packaging. (And it’s a good thing, too, or I would’ve definitely vetoed this toy.) The picture does not have step by step instructions, only an image of the final assembly. It does include an illustration for assembly of the elevator mechanism, which is good because otherwise I never would have gotten it back together. And I have an engineering degree, which did me absolutely no good confronted with this pile of pieces.

The variety of different pieces connect in different ways, but the instructions give very few hints.

The pieces do not fit together intuitively, since supports have a different circumference than the ramps on which the marbles travel. You have to slot the ramp into a support with a cutout portion, then stack those with other supports, all the time hoping you’ve counted the number right and the entire contraption won’t tip over and you end up starting again – all the while your kid hops up and down unable to contain his or her enthusiasm over the finished product which is irritatingly still not finished. Each of the five columns in our assembly goes at a random distance from one another, but although I’ve done it a number of times, I find it hard to estimate the correct spacing. So I end up with one column built but falling over because I misjudged the location of a different stack that supports it on the other side.

Here’s all the help you will get from the instruction manual, which includes multiple other models as well.

Because the pieces proved such a pain, I’ve never tried any other arrangements besides the one pictured. And even though we’ve had this toy for years, my oldest, at more than seven and half years, still can’t assemble it on his own, which leaves me stuck doing to dirty work. I’ve stored it downstairs tucked away in the vain hope they might forget about it, or that it might be more appealing to me as they got older (and also because I hate having tiny choking hazards around). No such luck. 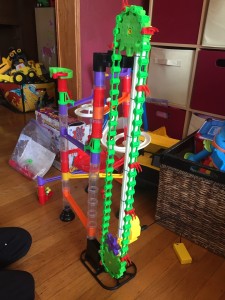 The little yellow box provides power for the motorized elevator, which scoops up marbles and returns them to the top.

My kids regularly leave the elevator running, so the batteries run out and we have to hunt down another pair. And the switch below the funnel means that every time, only half the marbles go to the elevator. So after enough runs, all the marbles clog at the other end of the line, instead of running infinitely on their own once you’ve gone to all the effort of assembling the pieces. To add insult to injury, the marbles are not a standard size. Once they go rolling under the couch, or get eaten by the dog, you can’t use regular marbles as a replacement.

Despite my loathing, kids love this thing.

I much prefer our other marble run, which my kids can build themselves when so inclined, and which I don’t need a college degree to assemble. It has more stuff to buy, but we could’ve started with a deluxe set to include more cool stunt pieces in our collection and avoid buying more down the road. But I made sure I didn’t hate it first, before losing my marbles.