My daughter recently celebrated her birthday. We let our kids choose dinner (out or in) and kind of cake they want for each celebration, and this one was no different except for one minor detail. My daughter had a very specific cake request.

I do not cook or bake, for a reason. We normally outsource this cake business so both kids and adults can consume it. But no one makes this concoction, much less in this arrangement. Nor do I have any idea where her inspiration came from.

First problem: I can’t cut in three even amounts.

She wanted a Neopolitan ice cream cake. I thought that would be a cinch, until she explained that one side of the cake would be chocolate, one side strawberry, and vanilla in the middle. Ok, I thought to myself. I can make this happen, since it’s her birthday request.

I still thought that when the tub of Neopolitan ice cream I found at the store came swirled instead of separated into distinct flavors. I even felt lucky when I scored another tub of three flavors in one in the proper striped sections. The order didn’t match up, but you work with what you’ve got. 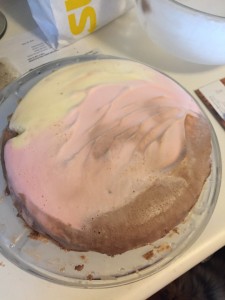 I should’ve stopped here and called it a success after the melted ice cream refroze into cool swirling patterns. But no.

I left it sitting out to soften so I could stick it into cake pans. I had this grand vision of slicing the tub, and dropping the chunks into round pans (because of course this ice cream cake can’t be rectangular) to spread out a bit.

Ha ha ha ha ha. It didn’t seem that complex until I had ice cream all over both hands and my work surface and the knife stuck in the middle of the gallon of rapidly melting ice cream and a preschooler babbling for attention and wanting to know what was going on.

These are all the utensils I used – just to get the ice cream into cake pans.

In case you’re wondering, I managed to use a second knife to cut from the opposite side, which worked well enough, and didn’t also get stuck. I had even dipped my knife into hot water to help me cut, but it only worked until I got to the still frozen middle.

That wasn’t the only freezing problem I encountered. Once I managed to get it into cake pans, I had to get it out again. The first one presented a challenge but I made it happen by sheer luck. So for the second I ran hot water over the outside of the pan, which means it slid right out. I stuck the entire cake stand (because I didn’t have anything else to hold this mess) covered into the freezer to let it solidify before attempting the perfect extraction with the third and final layer. 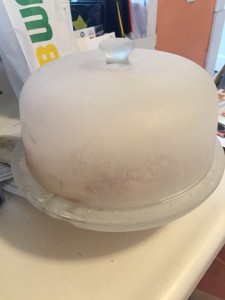 The lid froze to the bottom with melted ice cream. 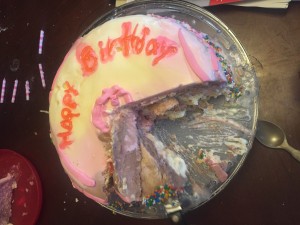 The frosting did not improve my efforts.