Despite my lack of enthusiasm for Play-Doh and all its derivatives, it has its moments. Like this past week, when my three year old scored a Play-Doh Fun Factory on sale at a nearby store.

He played with it for the rest of the evening. It even came with two large (not the fun size I’ve grown used to as party favors and treats) containers of orange and purple dough, so he was all set as soon as he got the box opened.

The set includes the pressing machine, as well as two different attachments to make ten shapes, a slicing tool, and two containers of dough.

The fun factory includes a press that squeezes dough into one of two attachments. Each rail attachment has five different shapes on it that mash the dough into long strings. It includes star shaped dough, round, spaghetti strands, and many more. It also comes with a plastic slicing tool to cut the strings into shorter bits.

If you mix the orange and purple, you end up with the this in between color.

My kid immediately mixed the two colors so now we have an indeterminate shade of purplish orange. He played with it every day for at least half an hour, so we’ve definitely gotten our five dollars out of it.

Dough gets loaded into the space on this side, and comes out through the chosen shapes on the other side by pressing down on the handle.

I had a similar Play-Doh set as a child and I loved making the different shapes of dough strings. Mine had a tube instead of the press, and the press definitely works much easier. It may not be simpler to clean, as dough gets into all the tiny hard to reach cracks, including the feet of the press’s base. The amount of joy it brings to my child far exceeds the effort required to clean it, especially since I can always leave the bits to dry out and eventually run out of dough. You can also get a deluxe fun factory set

that comes with a higher price tag as well as six containers of dough, shape cutters, stamps, and a rolling pin. 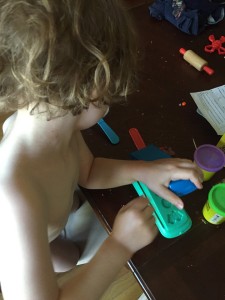 My son can spend a lot of quality time with his set.