As you may have read, we got one Epipen prescription for my son’s severe nut allergies refilled. We need three. I normally get three boxes at the same time, and while I can’t say it’s without issues, it’s at least not this huge of hassle.

But one of our Epipens expired early (the pharmacy will get rid of the oldest ones first, so if you don’t learn to check, you get an Epipen that’s supposed to be valid for 18 months that expires in six months or less), and I had to jump through all these hoops in April. Apparently, that single refill reset our prescription to one box, instead of the three I picked up last time. 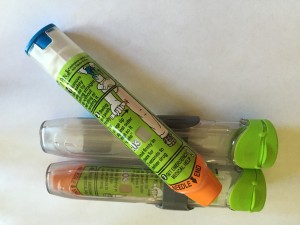 Epipens come two to a box, in case the first one doesn’t do the job. We usually have three boxes.

Now that we’ve picked up one box and “filled” our prescription, our health insurance won’t allow us to fill it again, even at a different pharmacy, for at least 30 days. Even though the same prescription allows for one refill. My husband thought he could go back and refill the prescription a mere two days after he picked the last one up. Ha ha ha ha ha! I didn’t know about the 30 day wait rule but I definitely knew about the hassles of getting Epipens refilled.

When we finally get the health insurance company to authorize this “early” refill, it turns out the pharmacy doesn’t have any Epipen Jr (the strength for kids differ from adults) left in stock at that location.

They manage to track down another one for us at a separate location, but it expires in five months, in December. We have one valid non-expired Epipen, and leave shortly for weeks abroad. Call me crazy, but I like to travel with two valid Epipens just in case a bag gets misplaced or something else unexpected happens, even more so when we’re out of the country.

I do have enough sense to check the expiration date of the Epipen we leave in a safe box at his school, and I almost feel like crying tears of relief when I see it doesn’t expire until next March. That means if we can scrape up only one more box, we are all set for seven months before we have to go through this hassle again.

I’d say kudos to me for having the foresight to address this issue more than two weeks before we left on a three week vacation. But actually our previous Epipens expired in August, and since I don’t mess around with this potentially life-saving stuff that I carry everywhere, I assumed that meant August 1st and not August 31st. So I got lucky that we managed to resolve the refill issues in *only* two weeks.

Let’s review. In two weeks time, I’ve made more than ten calls to my pediatrician, two to the pediatric allergist (the last begging for help refilling a prescription to get another Epipen), visited two separate pharmacies three times each, and called two separate pharmacies so many times I’ve lost count. We’ve also had to call our insurance company more than four times to try and figure out why we can’t get a simple prescription refill. I don’t have a job with regular hours and I can’t accomplish all this stuff without a second adult.