Traveling Genius in a Box

What I toss into my JetKids BedBox varies depending on the length of my trip, how many kids go with me, and how old they are. 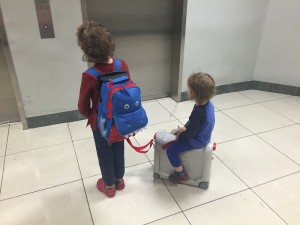 This compact box on wheels can hold an immense amount of stuff.

We’ve never used the infant bumpers that come included. We didn’t discover the awesomeness of the box until my youngest was more than two years old, yet we still use it on almost every flight. (And I don’t know how much we’d have used it for our first child when he was younger, because we never forked out for the extra airline ticket for the under twos.) I certainly use it to carry and transport kids and stuff, because my kids love it and argue over who gets to ride, and who gets to pull, and for how long. We also use it as a seat while waiting to board at the gate. Heck, my kids fight over it onboard, too. They barter the window seat for the “bed” seat. 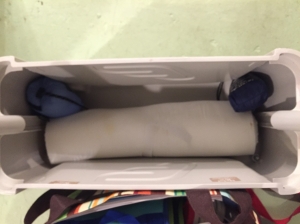 I keep the mattress rolled tight with two inflatable pillows tucked in the corners to leave more room for bigger books and magazines in between them.

But what do I keep inside? I carry the mattress rolled up as tight as I can get it, as well as at least one inflatable camping pillow. If I have room, I often have my kids’ favorite stuffed animals or object in there, as well as anything else that might help them sleep on the plane. For younger kids, I toss in a busy box. 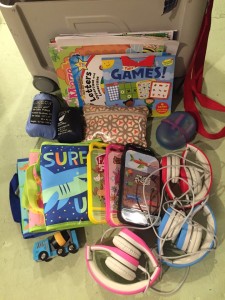 I can fit everything you see here in the JetKids BedBox on top of the included mattress and two inflatable pillows from the previous photo.

After that, I tend to put the heavy stuff in it, like electronics for the kids (Kindles, LeapPads, etc.) and their water cups after I’ve filled them. Sometimes I pack our spare outfits inside, underneath the mattress and other things I fully expect to use in flight. Otherwise, I take another bag and fill it with inflight entertainment, such as kid headphones, activity books, crayons, and sticker cases. Once we get on the plane, I can easily remove the entire bag, so I can still access it if someone’s sleeping on the folded out bed. I usually keep the snacks in my second carry on bag, in easy reach for hungry kids because we rarely make it onto the plane before they need caloric reinforcements. When we land, I can drop the entire thing back in the BedBox and have one less bag to carry or shove under the stroller. That leaves my focus on keeping up with my kids as they stumble off a plane after four or fourteen hours.