We’ve been shopping at Costco for basics like paper towels and toilet paper for years, well before we became parents. Now that my older kid packs on ten or more pounds in a year, I know where all that food goes, but I still get tired of hauling it home from the store.

We have a full flight of stairs up from street level to our house, and another half flight just to get to the front door. I gave up on hauling milk after my first child switched to cow’s milk. We’ve had milk delivery for years, which has saved me countless trips and aches from hauling gallons. (Our current consumption hovers around 3 gallons a week, down from 4 and 5 in previous years.)

I’ve tried Amazon’s delivery program, but their minimum order kept creeping up, eventually pricing me out. They didn’t always have what I needed, either, or the brands I preferred. 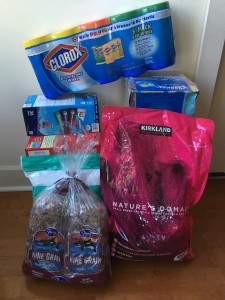 The best thing about this pile of items from Costco? I didn’t have to haul a single one up the stairs when they magically appeared on my doorstep.

But my friend just told me Costco delivers. It turns out they use InstaCart and can deliver the same day in less than two hours. I put in my order for everything on my Costco list (and some extras) around 12:15 p.m. and had everything on my doorstep by 1:40 p.m. for no extra charge, as long as you have $35 in your order. That price point equals roughly one item at Costco, so no problem there.

We still swear by Kirkland Signature baby wipes, even though we’re well past the diapering years. Costco can also deliver diapers at a discount, which I can’t quite even comprehend, not to mention any other heavy baby items you go through so fast but can’t conceivably carry with an infant or car seat loading down at least one hand. I only wish I’d realized that much earlier in the parenting game.

Now I don’t need everything in bulk (like spices and those tasty wasabi dried peas) but being able to order vats of frozen vegetables, loaves of bread, and ready made meals in addition to tissues and clorox wipes (hello, flu season!) makes a big dent in my shopping list. And it saves me both time and effort.