My biggest blunder this gifting season? Silly putty. We got each kid a batch of scented silly putty. I love this stuff in concept, and this Silly Putty even offered the additional enticement of being either sweet or stinky smelling. My kids love strong smells of any type, but, boy, did I make a mistake.

Silly Putty can both snap and stretch.

I loved silly putty as a kid, though I realize now maybe my mother did not. I loved how it could stretch, or break, and lift images off newspaper (which was definitely more of a thing during my childhood). I found the comics particularly rewarding on Silly Putty, as I could stretch them into even funnier dimensions. So when my husband grabbed three eggs full of the putty material for stocking stuffers, I had high hopes. Little did I know.

We got lucky when all three of our putties came out pleasantly scented, not stinky, and I breathed a sigh of sweet smelling relief. We got fruit punch, strawberry, and pineapple, and I didn’t find any of those scents overwhelming. My kids loved the ambiguity of not knowing what they might get inside, though I did miss the standard white flesh putty color. Ours came in two shades of pink, and one yellow. We went on our merry way opening gifts and celebrating.

We put scented Silly Putty in as stocking stuffers.

My youngest child loved his putty so much that, unbeknownst to me, he went to bed with it. It promptly got stuck to one of his fleece blankets, a material renowned for both easy cleaning and not harboring any permanent substances. Instead, we had a blanket stuck to itself in multiple places where the putty wouldn’t come off. We tried freezing the blanket. It made not a lick of difference. We got down on the floor and two adults spent more than twenty minutes scraping the worst off with a knife, while my child gleefully built another ball of the sticky stuff out of the bits we removed.

Pink globs of Silly Putty stuck in two of the four different places on my son’s fleece blanket.

You’d think I’d learn my lesson about keeping it in its egg shaped container and supervising its use, but no. Not two days later my oldest child fiddled with a ball of silly putty left on the table while playing a game. I thought how nice for his active self to have a toy he could fidget without damage, and went along my way. Only a few minutes later, I discovered that he has stuck silly putty to his (brand new) underwear. He had to go change, and despite washing, that pair still has a pink stain on the back. 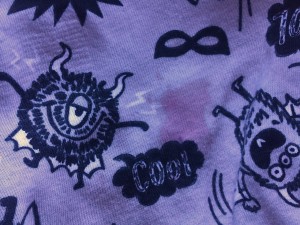 One of two places my son got pink Silly Putty stuck to his underwear while fiddling the insidious stuff. It looked like this after laundering.

So take it from me. Keep the silly putty in the hands of those who can handle the responsibility. And whatever you do, don’t let it near fabric. It could’ve been so much worse, like my couches or pets that got permanently puttied.