I’ve written about Uno, and how much even younger kids can enjoy the game. Now my kids got a variety of card games from a very kind neighbor during the holidays, including one called Fairy Queen, and we all love it.

Our neighbor gave the kids these small gifts a few days before official gift giving time, but after they finished school and started winter break. It worked out great for my kids, because they got more presents spread out over more days. It worked out even better for me, because we had calm, quiet games to play that kept them entertained and not going wild during some of the shortest days of the year, when lots of museums and other attractions closed for the holidays. 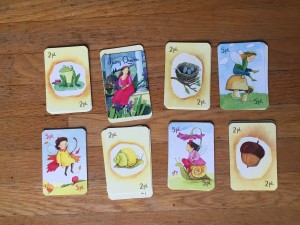 The whimsical illustrations make this game even more appealing.

My daughter got Fairy Queen, which I had never played. It has rules similar to Old Maid, except the pictures appeal to my daughter much more, and ending up with Fairy Queen gives you extra points rather than causing you to lose. This game features two different playing methods. In the first, you remove the single Fairy Queen and lay all other cards face down. You then turn over two cards in an attempt to make a match. If you get a pair, you get another turn. The person with the most wins, though you can compare number of matches or number of points. Each regular pair earns you 4 points, while the five fairy pairs have a value of five points.

The game comes with rules cards for two different styles of play.

Alternatively, you can put the Fairy Queen back into play, then deal all the cards out evenly between players. Each person looks at their own cards and places all their matches face up, then they take turns selecting one card from the next player. Players continue in rotation until all matches have been made. Then you count up points to see who wins, with the Fairy Queen herself worth 10 points.

My daughter plays this game over and over again in both its formats.

My daughter has played this game almost daily, especially during the school break. It works great for building math skills as well as memory, though kids only need very basic matching skills to play the memory game. With adults helping to tally points, even the smallest kid who can take turns can participate. As it requires a fair amount of luck, especially in the Old Maid version, it evens the playing field for kids of different ages.

The sturdy box includes a pull out tray for easy clean up and safe storage.

Our game came in a nicely illustrated box with a pull out drawer that holds the cards. The sturdy box works much better than the standard Uno boxes, which my kids still rip or tear trying to open and close it. And cards are harder to get back in the box when they hit the box flap. This sliding container has none of those problems, so they get cleaned up with less frustration, and we lose fewer cards.