Want to keep your kids entertained during long hours indoors without resorting to electronics? Perhaps you need to keep sick kids calm and quiet. Or maybe bad weather prevents you from leaving the house and kids from attending school. Scheduled time off can prove just as hard to fill. As a bonus, these games take up very little storage but can keep kids in a variety of ages entertained and prevent them from trashing the house for an hour or more. Their compact size also means they travel well.

Spot It! works for kids of almost any age as long as they can point and talk. In this card game, you lay out two circles with pictures in a theme of your choice. (Think sea animals or your kid’s favorite cartoon character.) Then kids and adults alike race to be the first to find the two items on each card that match. Collect the most cards to win the game. Spot It! comes in both regular and junior versions with fewer images per card, so almost any age can play. 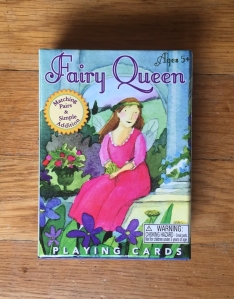 Fairy Queen offers two ways to play. Kids can either play a memory game that consists of spreading out all the cards upside down and turning over two at a time to try and make matches. The person with the most matches or points, depending on how you tally, wins. Or they can use the same cards to play a more advanced game similar to Old Maid that features fairies instead. Players take turns choosing cards randomly from other players to try and make the most matches. Points can still be tallied by the number of matches or total number of points as shown on each card.

Uno builds both color and number skills at almost any age. You can get decks themed to encourage kids to play, or go with the classic set. Vary the rules to determine the length of the game. Drawing one card when you can’t play means the game ends sooner. Drawing cards until you get one you can play can make the same game last much longer.

Try Crazy Eights when you’ve exhausted all those options. It works similarly to Uno, only with suits of cards instead of colors. The eight cards function as wild cards to change the suit, and players try to get rid of all their cards first to win.

Slamwich plays a little different. This high speed game focuses on patterns. Players flip over cards one at at time, and slam their hands down on the pile when they see any of a number of different sequences. Similar to the classic game of war, but with more appealing (and appetite inducing) illustrations, the fast paced game goes by quickly but can use up lots of time.