If you’ve read much of this blog, you know I used cloth diapers and made my own baby food. If you’ve never made your own mushed food, you might not know the need for a quality blender. Since I hate having to wash the entire blender and have limited counter space in my kitchen (not to mention a dearth of electrical outlets to plug into), I will take this opportunity to rave about immersion blenders.

If you haven’t encountered an immersion blender, they are a gift to cooks anywhere. My cooking skills don’t extend much beyond baby food mush and macaroni and cheese. But I still adore my immersion blender, so much so that when my first one broke, I replaced it with a newer stronger model. When I accidentally dropped that one on the floor, I signed up for the exact same model and it magically arrived under the tree one holiday season. I still couldn’t be happier. 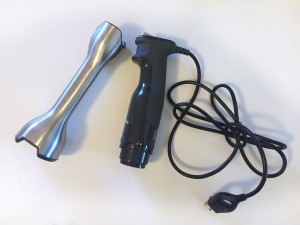 I love this compact yet strong and versatile Breville immersion blender.

This Breville immersion blender has 15 speeds. I use the highest setting almost exclusively to tackle ice. Unless my kids “help,” then I knock the power back to about half so the splatter makes less of a mess. In addition to the immersion blender itself, this model comes with a container with lid, so you can stick whatever you’ve made directly into the fridge for storage. It also has a whisk, and even a chopping blade with a bowl that attaches for that purpose. 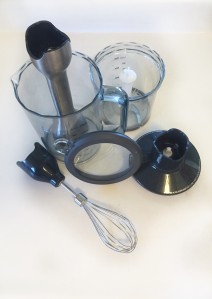 The immersion blender comes with all these accessories.

I use my blender with the IKEA food containers, so I rarely use any of the other accessories. The super strength motor piece attaches to each accessory separately, so it requires less room to store and can be moved quickly and easily from one accessory to the next for different cooking tasks. The parts that touch food can go into the dishwasher for simplified clean up. 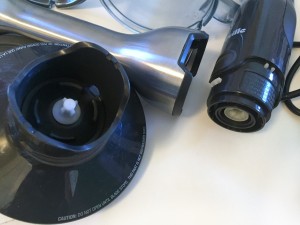 The motor on the top right attaches to each piece independently, reducing the amount of clean up needed.

Even though we’re well beyond the baby food stage, I still use the immersion blender at least six times a week to make smoothies. I often make two different smoothies in one morning. If you want fancier uses, you can use it to make some awesome black bean soup right in the pot, as well as salsa, pesto, milkshakes, and pretty much anything else that needs blending.

I use it on ice every single morning with nary a complaint.

If you will be blending ice every morning and want to avoid doing more dishes and buying more than one blender, this tool is for you. It would still be going strong if I hadn’t dropped it on the floor from more than six feet high out of sheer clumsiness (or sleep deprivation, take your pick), whereas the previous KitchenAid model I owned clunked out once I moved to daily use. 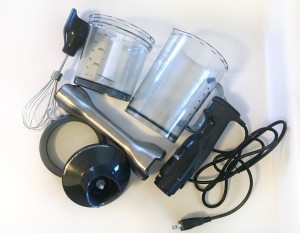 You get everything shown here to tackle a huge variety of chopping and mixing.

I couldn’t have lived without this blender during the baby years, but it has long outlived those days with infants in the house. And I fully expect to be using it even after my kids move out.